Here are a few versions of Dan Emmett‘s endlessly adaptable “Jordan is a Hard Road to Travel”, displaying the far-reaching sense of international politics and breaking-news commentary to be found on the antebellum popular stage…

First, from a sheet music edition at loc.gov:

Emmett’s original lyrics give us an example of topical minstrelsy, and provides an excellent jumping-off point for a general Jordan-centric survey of the same:

I just arrived in town fo’ to pass de time away,
And I settled all my bis’ness accordin
But I found it so cold when I went up de street
Dat I wished I was on de oder side ob Jordan.

I look to the East I look to the West
And I see ole Kossuth a comin’
With four bay horses hitch’d up in front,
To tote his money to de oder side ob Jordan.

David and Goliath both had a fight
A cullud man come up behind ’em,
He hit Goliath on de head, wid a bar of soft soap
And it sounded to de oder side ob Jordan.

Der’s been excitin’ times for de last month or two
About de great Presidential election
Frank Pierce got elected and sent a hasty plate ob soup *
To his opponent on de oder side ob Jordan.

Louis Napoleon after all is emperor of France
And all Europe begins to tremble accordin
But the Yankees don’t care for if with us he wants to fight
He’ll wish he’d staid on de oder side ob Jordan.

*ALSO: See here for more about Hasty Plates of Soup… >> 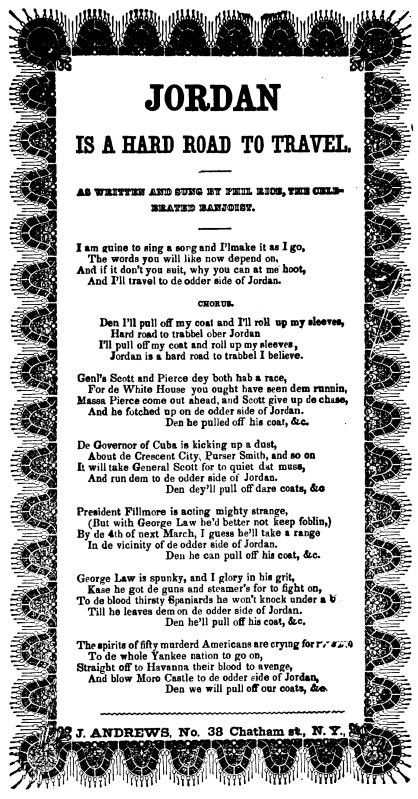 Phil Rice‘s version takes up the timely issue of Cuba:

De Governor of Cuba is kicking up a dust,
About the Crescent City*, Purser Smith, and so on
It will take General Scott for to quiet dat muss,
And run dem to de odder side of Jordan.

resident Fillmore is acting mighty strange,
(But with George Law he’d better not keep foblin,)
By de 4th of next March, I guess he’ll take a range
In de vicinity of de odder side of Jordan.

is spunky, and I glory in his grit,
Kase he got de guns and steamer’s for to fight on,
To de blood thirsty Spaniards he won’t knock under a [bit]
Till he leaves dem on de odder side of Jordan.

The spirits of fifty murdered Americans are crying for
To de whole Yankee nation to go on,

Straight off to Havanna their blood to avenge,
And blow Moro Castle to de odder side of Jordan,

Den we will pull off our coats, &c.

And now we turn our attentions to transatlantic disputes:

As the first verse proclaims, the careful reader can expect to note sundry topical items mentioned in the above lyric:

Of all the banjo songs that have been sung of late,
There is none that is now so often called on,
As the one I sing myself, and apply it to the times,
It’s called “On the Other Side of Jordan.”

Around the Crystal Palace there are a great many shows,
Where all the country green horns are drawn in–
There’r snakes and alligators, mammouth mules and big ‘taters,
That were raised upon the other side of Jordan.

The sovereign of the seas, she went to Liverpool,
In less than fourteen days, too, according,
Johnny Bull he wiped his eyes, and looked with surprise,
At this clipper from the Yankee side of Jordan.

The ladies of England have sent a big address
About slavery, and all its horrors, according,
They had better look at home, to their own white slaves,
That are starving on the English side of Jordan.

They have got o bearded lady down at Barnum‘s show,
And lots of pictures outside, according,
She’s going to take her eye-lashes for a pair of mustaches,
For to trabble on the other side of Jordan.

The Duchess of Southerland, she keeps the Stafford House,
The place where the “Black Swan” is boarding;
At a musical party, they asked for a song,
And she gave them–On the other side of Jordan.

Our great father, Washington, he was a mighty man,
And all the Yankees do their fighting according,
They will raise the flag of freedom whereever they can,
Till they plant it on the other side of Jordan.

The next edition, #5 (from the same printer), takes aim at religious cults and the bestselling novel of the age: 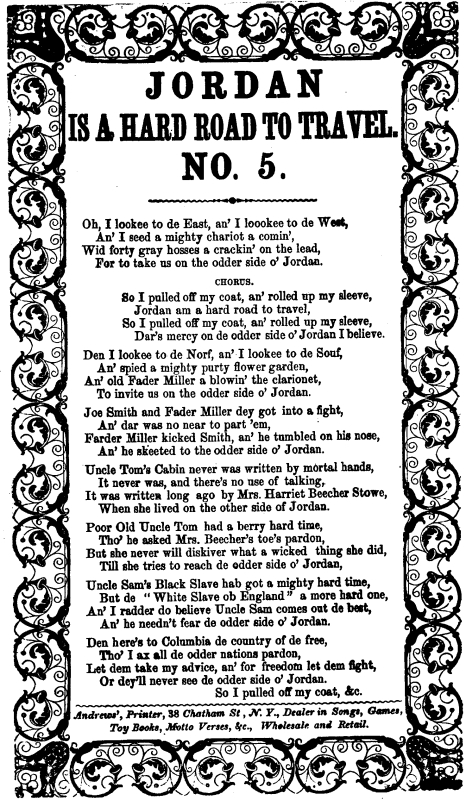 Den I lookee to de Norf, an’ I lookee to de Souf,
An’ spied a mighty purty flower garden,
An’ old Fader Miller a blowin’ the clarionet,
To invite us on the odder side o’ Jordan.

oe Smith and Fader Miller dey got into a fight,
An’ dar was no near to part ’em,
Farder Miller kicked Smith, an’ he tumbled on his nose,
An’ he skeeted to the odder side o’ Jordan.

never was written by mortal hands,
It never was, and there’s no use of talking,
It was written long ago by Mrs. Harriet Beecher Stowe,
When she lived on the other side of Jordan.

Poor Old Uncle Tom had a berry hard time,
Tho’ he asked Mrs. Beecher’s toe’s pardon,
But she never will diskiver what a wicked thing she did,
Till she tries to reach de odder side o’ Jordan,

hab got a mighty hard time,
But de “White Slave ob England” a more hard one,
An’ I radder do believe Uncle Sam comes out de best,
An’ he needn’t fear de odder side o’ Jordan.

And version #6 ridicules Irish immigrants in a violently nativist rout: 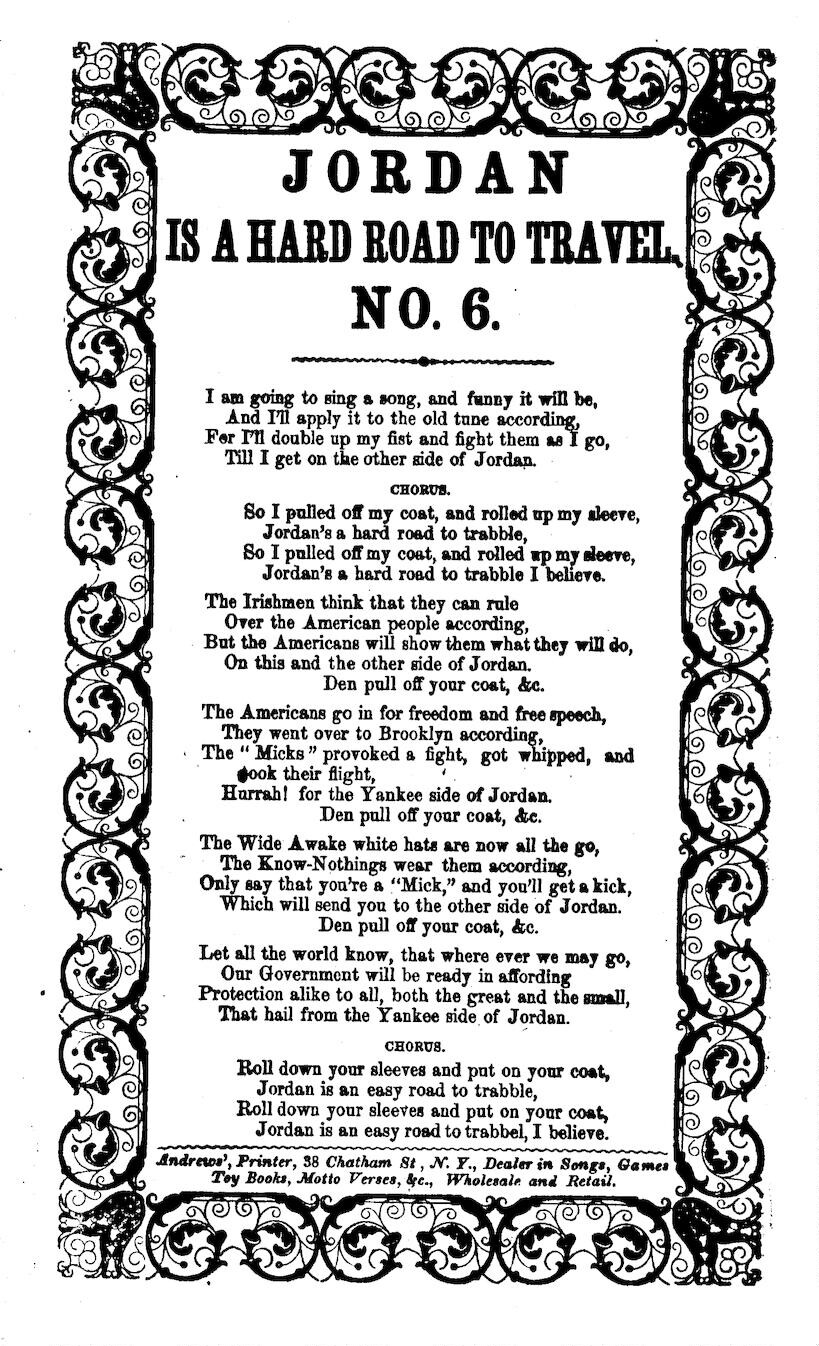 The Americans go in for freedom and free speech,
They went over to Brooklyn according,
The “Micks” provoked a fight, got whipped, and took their flight,

Hurrah! for the Yankee side of Jordan.

Den pull off your coat, &c.

The Wide Awake white hats are now all the go,
The Know-Nothings wear them according, 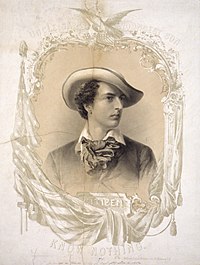 Only say that you’re a “Mick,” and you’ll get a kick,
Which will send you to the other side of Jordan.

Den pull off your coat, &c.

Let all the world know, that where ever we may go,
Our Government will be ready in affording
Protection alike to all, both the great and the small,
That hail from the Yankee side of Jordan.

This sentiment suggests yet another songsheet adaptation of our old chesnut by the same printer: “Wide Awake Jordan”…

For more on such antebellum gotham street culture, see:

Note the inversion of the final chorus:

Are we suiting up for street fighting, or even donning a uniform of the Wide-Awakes or some other antebellum militia… or perhaps preparing to flee back to the Old Country in the face of menacing militant Nativism?