Here’s a seemingly humorous song from the minstrel stage: 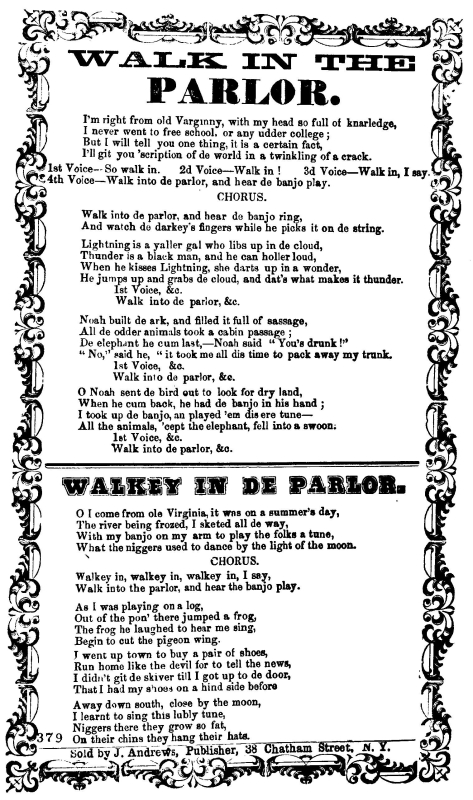 Note especially the connections delineated between slavery, land, and knowledge:

V.1 ~ “I’m right from old Varginny, with my head so full of knarledge…”

The “slave” narrator has never been to school, but close connection to the land of Virginia (as the mythical homeland of one of the first blackface minstrel troupes and numerous bards thereafter) qualifies him to expound on world history.

Advocates of race-based slavery in the antebellum United States framed slaves as primitive humans who lived much closer to nature and were in fact suited by nature for slavery.  How “natural,” then, to portray African Americans as part of environmental processes like the weather.

In contrast, Frederick Douglass rebuts this position in his 1850 lecture, “The Nature of Slavery” (emphasis added):

There can be no peace to the wicked while slavery continues in the land. It will be condemned; and while it is condemned there will be agitation. Nature must cease to be nature; men must become monsters; humanity must be transformed; Christianity must be exterminated; all ideas of justice and the laws of eternal goodness must be utterly blotted out from the human soul…

Okay, maybe that verse is just kind of cornball funny.

It does not escape our notice that the dove finds not nourishing greenery but the BANJO, a symbol of African American artistry amidst slavery as much as an indicator of American independence, authenticity, and novelty (in contrast to European colonialism, artifice, and classicism).   Crucially, the banjo here also becomes a symbol of survival and celebration under apocalyptic conditions.

This brings us to two correlative sources:

Later in the decade, Jesse Hutchinson, Jr. will use this tune for “Uncle Sam’s Farm”…