GO LISTEN: OnBeing.org presents an enlightening 2010 interview with Joe Carter on the history and importance of African-American spirituals: 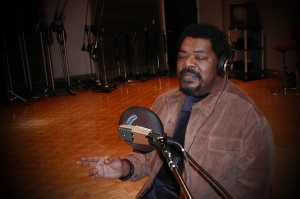 OnBeing.org: “Joe Carter & the Legacy of the African-American Spiritual” >>

Visit the program’s “Listening Room” for audio from Carter’s performances of specific spirituals.

Quotes from the program transcript:

I think that the sorrow became the entrance, the open door, into a whole new world of experience. They, the slaves, could not experience the normal world. They couldn’t go out and go shopping. They couldn’t buy a house. They couldn’t do all the things that the normal white person did. They were slaves, you know? They were whipped and they had chains. And they found a secret door to take them into that world where the tears are wiped away.

So, there was this concept: The master doesn’t really understand us. We play a role for him and he sees us in a certain way, and we’ll play that role as much as we can so that we won’t get whipped. So, we’ve got to understand his thinking, but he can never understand our thinking. And so, the spirituals were all, all of the spirituals, all of the songs were masks …

An old master comes out one day. He says, “Hey, Joe. Big Joe. I don’t hear nobody singing down there. You guys strike me up one of them good old spiritual songs. You know how I like them. Give me one of them good old songs.” And — often when I go to the schoolchildren, I have them sing with me. I say, “OK. Now pretend you’re going to be — you’re all slaves, OK? And, and master wants us to sing a song, but you — we don’t really want to sing for master, do we?” “No. No, we don’t.” I say, “Well, I’ll tell you something. Master loves our singing, but he doesn’t listen to the words we say. He doesn’t have a clue what we’re — so we can say anything we want. So, let’s give the master a good old song.” …

And after we go through the song, they go, “Hey, old master, how was that one?” …

You know, I think what we’re talking about human suffering and how do we survive when the worst happens? What are the mechanisms? And I think that African-Americans have shown the world, and other peoples have done it, too. Other peoples are doing it all the time, and it’s the same process. It doesn’t matter who the people are. It doesn’t matter whether the song is an actual song of notes and music or whether it’s the spirit of a people expressed in some other way, but you’ll find, for example, when I sing these songs, I can sing “Motherless Child” in Siberia; they know what it means. They’ve been through hell. I can go to Scotland and Ireland and Wales and sing these. They understand the sentiment.