Ken Flaherty’s lavishly printed folio collects the recordings and ephemera of Polk Miller & the Old South Quartette (1909-1928), in all their shocking and confusing beauty: 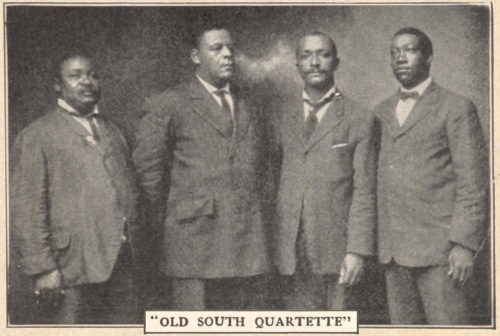 At the dawn of the 20th century, Miller, a confederate veteran and unabashed apologist for slavery, recorded spme of the singing he remembered from the Civil War, and the music he learned as a child from slaves on his father’s plantation before the War.  As it happens, he also organized one of the first ever integrated recording sessions in his efforts to document 19th century African-American music with his African-American backing quartet.  The results are riveting, amazing,  and disturbing all at once.

“He glorified black music, while at the same wearing the stars and bars, standing up for the legacy of the Confederacy.” — Producer Ken Flaherty on NPR

“I think that Polk Miller, and his wonderful four, is about the only thing the country can furnish that is originally and utterly American.  Possibly it can furnish something more enjoyable, but I must doubt it until I forget that musical earthquake, ‘The Watermelon Party’.” — Mark Twain

Perhaps most intriguing is the OSQ’s 1914 interracial performance of “Bonnie Blue Flag”: