Francis Scott Key wrote his poem “The Defense of Fort McHenry” to commemorate an 1814 battle with the British.  The song was popular during the Civil War, but did not become the United States’ national anthem until 1931.  Presently, it is almost never performed beyond its first verse, so few US citizens and singers are aware of its militant anti-Abolition slant.

The quote, from the First Inaugural Address of a slave-owning president, seems to speak directly to the historical moment of the Civil War:

“I know, indeed, that some honest men fear that a republican government cannot be strong–that this government is not strong enough. But would the honest patriot, in the full tide of successful experiment, abandon a government which has so far kept us free and firm, on the theoretic and visionary fear, that this government, the world’s best hope, may, by possibility, want energy to protect itself? I trust not. I believe this, on the contrary, the strongest government on earth. I believe it the only one where every man, at the call of the law, would fly to the standard of the law, and would meet invasions of the public order as his own personal concern.”

A pleasant sentiment — but is it true?  Would EVERY man “fly to the standard” in wartime?  Would even enslaved African Americans, for example, really fight to defend their masters’ property… or might they prefer to join an invading army and fight against the country that held them in bondage?  The British army’s capture of Washington City in 1814 put Jefferson’s notion to the test.

Oh! say can you see, by the dawn’s early light,
What so proudly we hailed at the twilight’s last gleaming,
Whose stripes and bright stars thro’ the perilous fight,
O’er the ramparts we watch’d were so gallantly streaming;
And the rockets red glare, bombs bursting in air,
Gave proof thro’ the night that our flag was still there…

Yes, it’s a battle all right… In the case of Scott’s poem, the British attack by sea, and Baltimore’s Fort McHenry holds firm! 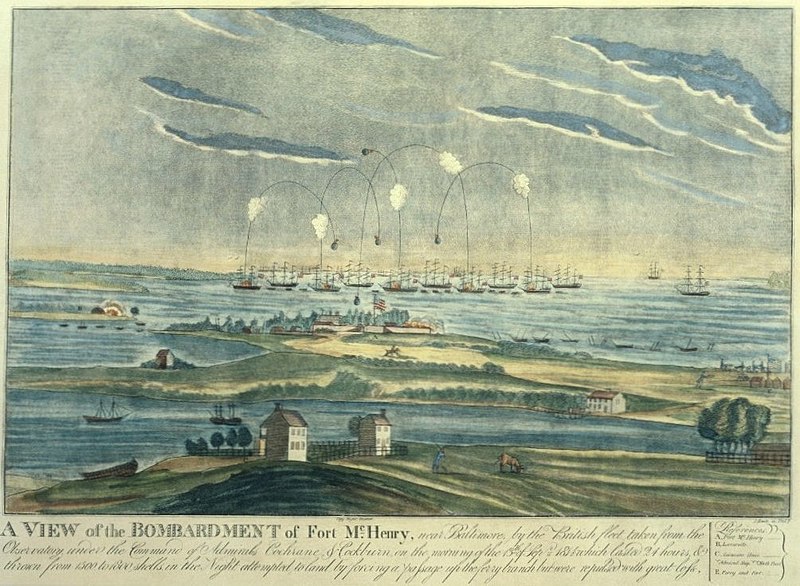 … And where is that band who so vauntingly swore,
That the havoc of war and the battle’s confusion,
A home and a country should leave us no more?
Their blood has washed out their foul footsteps pollution.
No refuge could save the hireling and slave
From the terror of flight, or the gloom of the grave,
And the star spangled banner in triumph doth wave,
O’er the land of the free, and the home of the brave.

The British army’s long use of mercenary troops (hirelings) to enforce imperial rule dates to before the Hessian forces used in the American Revolution… But what’s this deadly vitriol about the slaves?  As it turns out, when the British captured and burned Washington (and other cities) in 1814, they made use of emancipated former slaves as guides and combat troops.

In fact, to strike fear into the hearts of American masters throughout the Maryland countryside, the British forces put the emancipated slaves at the head of their marching columns.  Andrew Cockburn’s excellent article “Washington Is Burning: Two centuries of racial tribulation in the nation’s capital” (Harper’s, September 2014) explores the links between the Star Spangled Banner and slavery in antebellum society, centered on the 1814 burning of Washington:

For myself, the [lyrics of the Star Spangled Banner] always evoke a glow of family pride, because Key’s malign desire that fleeing slaves should find no refuge was directly inspired by the actions of my distinguished relative Admiral Sir George Cockburn

of the Royal Navy. Two hundred years ago this August, he fought his way to the White House at the head of an army partly composed of slaves he had freed, armed, and trained and torched the place, along with the Capitol and much of official Washington.

These stark images from LOC.gov demonstrate the extent of the damage Cockburn’s hybrid forces inflicted on the young capital city:

Interestingly enough, as per Jefferson’s sentiment, some enslaved African Americans actually did strive to protect the property of their masters during the attack — notably President Madison’s slave Paul Jennings.  Also notably, while African Americans aiding the British side of the attack were emancipated as a reward, the Madisons neither emancipated Jennings nor even allowed him to buy his own freedom, choosing instead to sell him in 1846.  (Jennings immediately became active in abolitionist activities before the Civil War; see here for recent Paul Jennings news.)

Thus at the heart of the scene, we have the complicated symbol of the White House ruins — built by slaves, protected by slaves, burnt by a British army headed by liberated slaves. 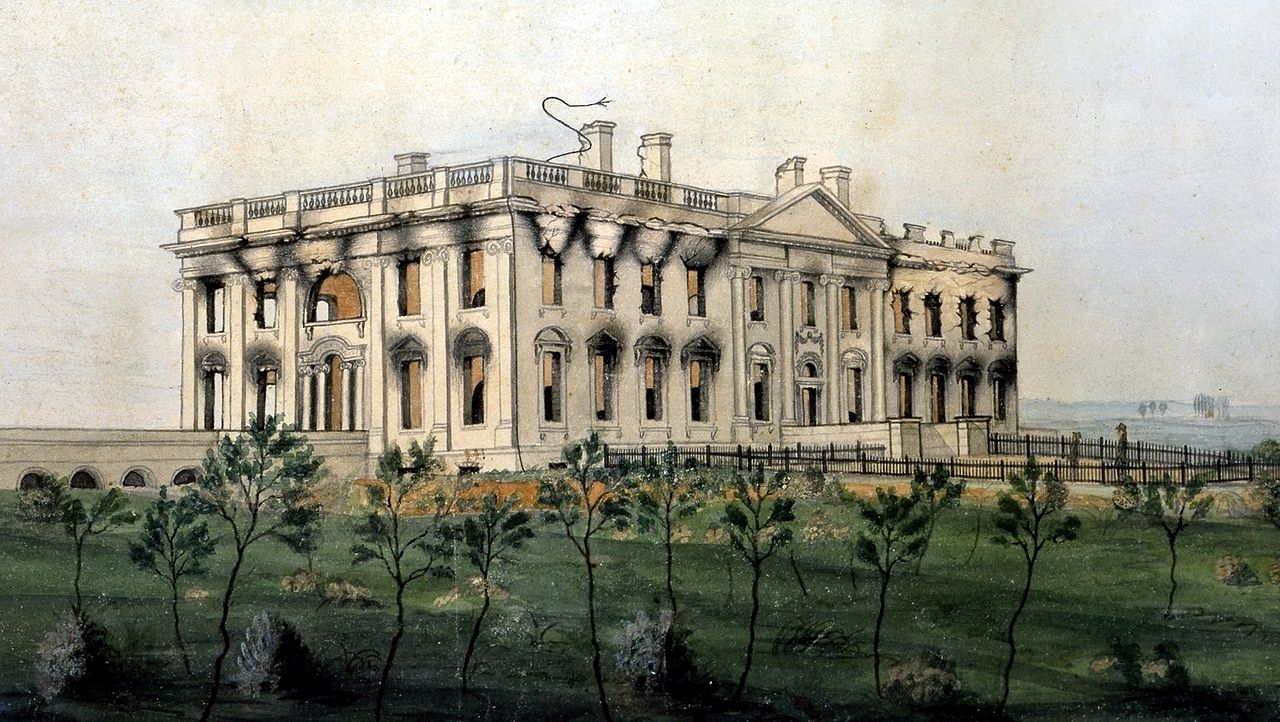 And then we have Key’s own complicated views of slavery and nationality.  A not exactly pro-slavery slave owner who as a lawyer sometimes represented slaves seeking freedom, Key was a founding member of the American Colonization Society.  That is, he advocated the emancipation of slaves with their removal to Africa.  He also was a staunch anti-Abolitionist.  His closing verses establish a righteously nativist, almost separatist sense of nationality that would serve well the Confederate cause a half-century later in numerous Civil War-era re-writings of the lyric:

O, thus be it ever, when freemen shall stand,
Between their loved home, and the war’s desolation,
Blessed with victory and peace, may the Heaven rescued land
Praise the power that hath made and preserved us a nation.
Then conquer we must, when our cause it is just,
And this be our motto, “In God is our trust!”
And the star spangled banner in triumph shall wave,
O’er the land of the free, and the home of the brave.

And now on our soil, when traitors assail,
That glorious flag, by all nations respected,
Defiant we fling its bright folds to the gale,
And swear, from rebellion it shall be protected;
Yes, we swear to defend, to the last bitter end,
The red, white and blue, which in Union still blend,
And the star spangled banner in triumph shall wave,
O’er all the broad land of the free and the brave.

In 1814, the term “freemen” still had a severely limited and exclusive meaning.  Thus we should always remember that in Key’s mind, these “traitors” engaged in “rebellion” included enslaved African Americans willing to fight for their freedom against an established government and a social system that did not (yet) acknowledge them as members of the American democratic project.

By the advent of the Civil War, the definitions of patriotism and treason would again be an open question, and once again the loyalties of free and enslaved African Americans would prove a decisive factor in the contest…

Here’s another interesting aspect of the US National Anthem:  The melody comes from “To Anacreon in Heaven,” an amateur musicians’ dinner club drinking song, sung since the 1700s at the Anacreontic Society (London).

Some sample lyrics give a taste of the heady classical tone of the gentlemen’s carnival:

To Anacreon in Heav’n, where he sat in full Glee,
A few Sons of Harmony sent a Petition,
That he their Inspirer and Patron would be;
When this answer arriv’d from the Jolly Old Grecian
“Voice, Fiddle, and Flute,
“no longer be mute,
“I’ll lend you my Name and inspire you to boot,
“And, besides I’ll instruct you, like me, to intwine
“The Myrtle of Venus with Bacchus’s Vine.”