This lively song appears in Rice’s “Correct Method for the Banjo” (1858):

One of the first details to notice is the reference to early banjo technology (verse 2):

About some twenty years ago
Old Butler reigned wid his banjo…
‘Twas a gourd, three string’d, and an old pine stick,
But when he hit it he made it speak.

“… they [Negroes] generally meet together and amuse themselves with Dancing to the Banjo. This musical instrument (if it may be so called) is made of a Gourd something in the imitation of a guitar, with only four strings…”

A good example of these pre-minstrel era banjos appears in the painting “The Old Plantation”: 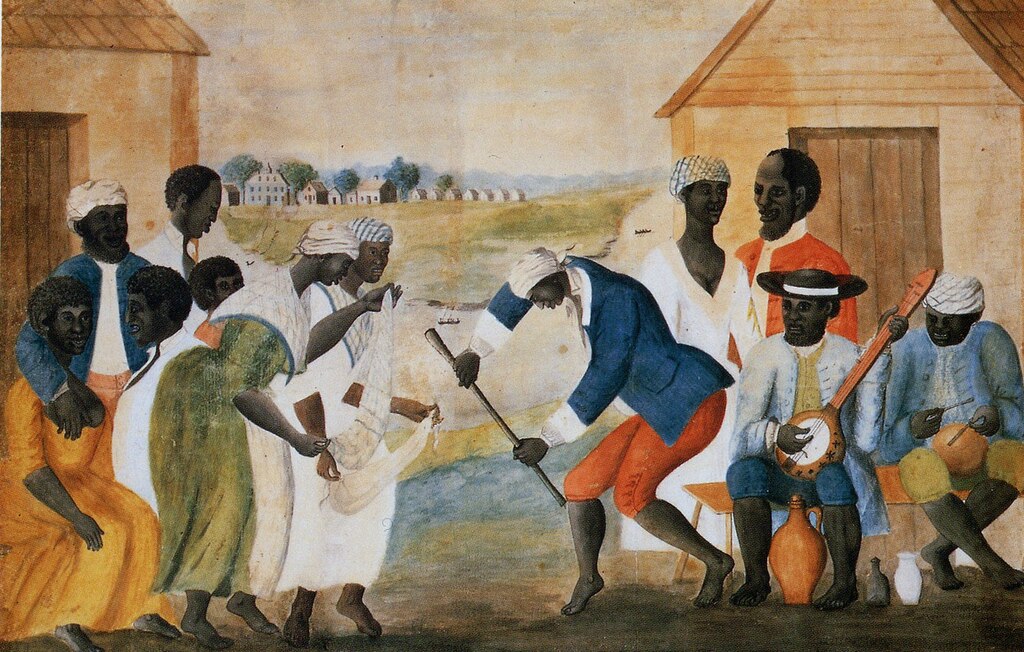 Joel Walker Sweeney is often credited with adding the fourth melody string (the lowest-pitched string of the standard 5-string layout) sometime in the 1830s.  So apparently sometime in the late 1830s, Butler is playing a pre-Sweeney gourd instrument (probably “three string’d” without counting the fourth drone string), and he gets some serious sound out of it.

But who exactly IS this mysterious banjo master, this Picayune Butler?  In Allston Brown’s account “The Origins of Negro Minstrelsy” (written in 1874, covering the 1820s and 1830s), Butler appears as:

… a French darkie, a banjo player, known from New Orleans to Cincinnati as Picayune Butler — a copper-colored gentleman, who gathered many a picayune by singing “Picayune Butler is Going Away,” accompanying himself on his four stringed banjo.

However, he also makes an appearance in 1857 as a well-known (albeit drunken) banjo hero playing top-billing in the “First Banjo Tournament in America”:

And when he made his appearance you should have heard the reception he got.  I thought the roof would fall off, but it was plainly seen that he was a little under the influence of liquor; so much so, that he broke two strings during his trial… [which] weakened him considerably.

By the 1850s in New York City, the racial dynamics of minstrelsy were such that a southern black performer’s top-level entry in an otherwise all-white banjo contest would surely evoke notice from the chronicler — so what are we to make of Butler’s origins and identity?

Adding some exotic flair the legend, when Commodore Perry’s flotilla steamed into Tokyo bay in 1853-4 to force Japan’s entry into the global economy, US Navy sailors gave “Ethiopian concerts” on board Perry’s flagship for the benefit of invited Shogun ministers.  Some preserved playbills suggest they may have led off their very first show with a song they called, “Picayune Butler”:

Here’s a glimpse of the band, courtesy of an anonymous Japanese artist:

For a full discussion of the cultural exchanges between Japanese artists and American sailors, see John Dower’s essay for MIT’s “Visualizing Cultures” exhibit and Brian Rouleau’s survey and analysis of the events & attitudes of the era.

So there you have him, Picayune Butler… Perhaps a well-traveled southern street musician, and/or a washed-up northern banjo master, serving as front-line international ambassador of US culture as East meets West.

And then, of course, just when we feel like maybe we’re getting a sense of what’s what, we stumble across this 1861 song sheet: